Court Rules Firearm Possession is Not Probable Cause for Detention

Hold on to your hats, two separate courts ruled in favor of gun owners and firearms possession. The first case has to do with open carry and whether or not the lawful possession of a firearm is probable cause for detention.
Case number two is a bit more complex as it deals not so much with firearms possession under the 2nd Amendment, but guns as property under the 4th Amendment. Jarrad has a new song to introduce to everyone as well.

“A Toledo man can sue a city police officer for detaining him illegally in 2010 for openly carrying a semiautomatic handgun in his neighborhood, a federal appeals court ruled on Wednesday.

The three-judge panel of the Cincinnati-based 6th U.S. Circuit Court of Appeals, however, threw out similar allegations made against a second officer who, the court found, had acted in good faith based on what he’d been told by the officer who was on the scene.

“The Fourth Amendment no doubt permitted [Officer David] Bright to approach [Shawn] Northrup and to ask him questions,” Circuit Judge Jeffrey Sutton wrote. “But that is not what he did. He relied on these facts to stop Northrup, disarm him, and handcuff him.

“Ohio law permits the open carry of firearms …, and thus permitted Northrup to do exactly what he was doing,” Judge Sutton wrote. “While the dispatcher and motorcyclist may not have known the details of Ohio’s open-carry firearm law, the police officer had no basis for such uncertainty.”

On June 16, 2010, Shawn and Denise Northrup were walking down Rochelle Road in their neighborhood with their Yorkshire terrier on a leash when a passing motorcyclist challenged Mr. Northrup for openly carrying the handgun in a holster next to his cell phone. The motorcyclist called 911.

Upon his arrival at the scene, Officer Bright told Mr. Northrup to hand the dog’s leash to his wife, which he did. The officer said Mr. Northrup removed his cell phone and then moved his hand back toward the gun where the phone had been, which the officer saw as a “furtive movement.”

Mr. Northrup said he removed his phone to record the interaction. He kept asking questions rather than comply with the officer’s demand that he turn around and raise his hands above his head. He provided his driver’s license upon demand, but he told the officer to look up his concealed-carry permit himself.

The officer took the gun and put Mr. Northrup in the squad car under suspicion that he was “inducing panic.” The officer learned Mr. Northrup had a valid concealed-carry permit.

Half an hour later, Sgt. Daniel Ray arrived at the scene. Mr. Northrup was released with a citation for “failing to disclose personal information,” a charge that was later dropped.

“They filed trumped-up charges because they made a mistake,” said Mr. Northrup’s Sylvania attorney, Daniel T. Ellis. He said Toledo has not been alone in how cities treat open carry.

“Columbus is very restrictive,” he said. “Cleveland is kind of restrictive. Cincinnati is restrictive. I think Toledo is getting better. Police officers do not want people to carry firearms. They seem not to want to abide by the Constitution that allows people to do so.”

Mr. Northrup sued the officers and other representatives of Toledo police, arguing that they violated his rights under the U.S. Constitution and Ohio law. A U.S. District Court judge in Toledo granted the officers’ motions to throw out some of the charges against him while allowing some to proceed.

Mr. Northrup appealed. Wednesday’s ruling agreed and disagreed with portions of the lower court’s decision. The 6th Circuit threw out all allegations against Sergeant Ray, determining he was entitled to qualified immunity because he had acted based on what Officer Bright had told him.

Officer Bright had argued he had reasonable suspicion to detain Mr. Northrup, noting he was openly carrying a firearm and that he was responding to a 911 call. But the appeals court determined Mr. Northrup can proceed with the allegation that Officer Bright violated his Fourth Amendment protections against illegal search and seizure.

“Not only has the state made open carry of a firearm legal, but it also does not require gun owners to produce or even carry their licenses for inquiring officers,” Judge Sutton wrote.“

“A unanimous Supreme Court ruled Monday that the government can’t prevent a convicted felon who is barred from possessing firearms from trying to sell his guns after they are confiscated by authorities.

The justices sided with Tony Henderson, a former U.S. Border Patrol agent who agreed to turn over his collection of 19 firearms to the FBI as a condition of release after he was arrested and charged with distributing marijuana.

After he pleaded guilty, Henderson wanted to sell the weapons valued at more than $3,500 to a friend, or transfer them to his wife. But lower courts found that doing so would technically give Henderson possession of the weapons in violation of the law. Prosecutors also said they were concerned that Henderson’s friend or wife might give him access to the weapons.

Writing for the court, Justice Elena Kagan said letting a convicted felon sell or transfer guns is allowed as long as a court is satisfied that the person getting the weapons won’t give the felon control over them.

“A felon cannot evade the strictures of (the law) by arranging a sham transfer that leaves him in effective control of his guns,” Kagan said.

Kagan said the district court could have ordered the guns turned over to a federally-licensed firearms dealer, who would sell them with proceeds going to Henderson. She said the lower court also could allow Henderson to transfer the guns to another person who will not allow him “to exert any influence over their use.”

She said the government’s reading of the law goes too far in saying Henderson would illegally “possess” the weapons just by being allowed to sell them.“ 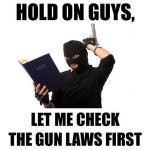