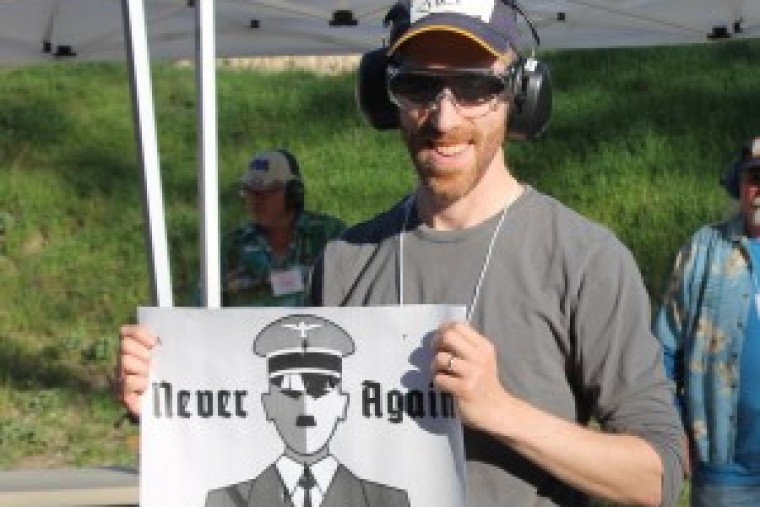 I lifted the .45 semi-automatic, charged it, and aimed at the base of his throat. I squeezed the trigger, and put a bullet through my mark as the Springfield XD kicked sharply.

My next shot was right of center, above the left eye, as I struggled to recover my aim. My next shots, though, were right where I wanted them: above the hands, through the heart, between the eyes.

At the signal, we retrieved our targets–perforated Hitler caricatures with the words “Never Again” in Gothic script.

So ended my day with “Jews Can Shoot,” a project of the Children of Jewish Holocaust Survivors. The program is dedicated to teaching Jewish Americans how to handle weapons, with a view to encouraging them to own guns for self-defense. It is staffed by professional firearms instructors and assisted by volunteers from the National Rifle Association. Its most eager participants are mothers, fathers, grandparents–the people at the next booth in the deli. At 37, I was the youngest there.

Doris began our day at the shooting range with an impassioned lecture about why Jews in particular needed to be ready. “In Europe, the pessimists left. The optimists went to Auschwitz,” she said.

Handouts distributed with the course recalled how the Nazis used gun control laws and gun registration to identify and disarm Jews and others who might have resisted the regime.

While that is not likely to happen in America, Doris said, the lesson of history is that Jews must be prepared.

She could have added: it’s a scary time to be Jewish. Not quite 1930s scary–or, as President Barack Obama might say, not as bad as the Crusades. But scary nonetheless.

You also start to doubt the mental competence of the Jewish establishment when its leaders join left-wing Democrats and professional Israel-bashers in publicly opposing a speech by Israeli Prime Minister Benjamin Netanyahu to Congress.

You start to wonder if things have already gone too far when Jewish students are taunted by radical Muslim classmates with chants of “Allahu Akbar!” and swastikas are daubed on a frat house in a place as bland as the University of California Davis.

Sure, it’s a frightening time for Americans in general, too. The White House introduced a new National Security Strategy last week that promised to defend Yemen–on the day Yemen fell to Iranian-backed rebels. The president wants to establish a “new equilibrium” in the Middle East by making Iran a regional power–you know, the same regime that has killed many hundreds, if not thousands, of Americans and planned a terror attack in Washington, D.C. on President Obama’s watch.

It all looks worse from a Jewish perspective. Left-wing Democrats in Congress–you know, the same ones who leapt to their feet when the Mexican president bashed a U.S. state–are boycotting Netanyahu’s speech, not out of any real concern for the national interest but because they feel Bibi disrespected the president.

They are not likewise protesting a speech by Pope Francis in September, who was invited in exactly the same way, i.e. with no White House input. You start to wonder.

There’s not much to do about that–especially about the president’s indifference. This is a man who plays golf or shoots selfies after learning that American hostages have been executed by the most evil wretches that have crawled the earth since Hitler’s S.S.

Me and the elderly couple gingerly toting the Glock case to the range. Me and the old lady wrestling with the kick on a snub-nosed revolver.

As a Jew, I thank God for the Second Amendment.

Info War on Israel Tactic #3, Double Standards, Meaning High Standards for Israel, None for All Else